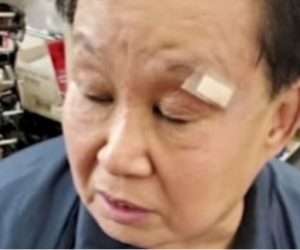 ~While waiting for the bus in LA

Samuel Kang, 70, was waiting for a bus at the corner of 5th Street and Western Avenue on Sept. 20 when he first came across Cartrell Smith, who, after walking by, hit Kang in the face. Kang has some difficulty speaking in English, but he remembers what Smith said during the attack. “Son of a b*tch, motherf**ker, go back to your country, go back to your country,” he recalled the suspect as saying. Kang, who suffered bruises on his forehead, managed to flee from Smith and report the attack to an officer patrolling nearby. Shortly after, Smith was arrested for misdemeanor battery. He was released hours later on his own recognizance.